skip to main | skip to sidebar

For a variety of reasons, I failed to finish.

1) After a couple of years of being chronically injured (mainly calf related), I was finally feeling fairly good. And for some reason, I had this weird idea that I could run a 50 mile race "any weekend." I think this is probably true for a 50K, but as we'll see, not a 50 miler.

2) I signed up just ten days before the race. I am not sure now why I decided to do this. But I did look over the web site and Facebook and saw something about a hilly race just four hours or so from me. So why not? The race description included the following:"All the snow should be gone and the trail should be in good shape, but once in awhile some patchy ice / snow and mud will linger." Sounds good. Of course, my mind skipped over this next part: "Be prepared for all weather and trail-conditions, watch the forecast and plan accordingly" and focused again on: "typically, this is a beautiful time of year to run in Minnesota." And there were lots of pictures of nice dry ground. That's still what you see on the race web site. I also looked on the Facebook site and saw no mention of snow or anything. Yes there was that 9300 feet of up and down, but those numbers don't translate well into my mind. And besides, I was only going to do 50 miles while others were doing 100! So 50 couldn't be that bad. So I signed up.

3) To get right to the point: Just after I signed up, people started mentioning a snowy course. Oh, well that's alright. I can run in snow. However things started to sound more and more nasty as race day approached. But I arrived, and, long story short, the course was A) WAY too full of ice and snow, and water and mud for me to handle, and B) WAY too hilly for me! Really, I cannot describe to you all the ice and muck we went through. I was woefully unprepared and gutted out two laps for 33.4 miles, and stopped with my tail between my destroyed and cramping legs. I could have limped another lap and finished by the 18 hour time limit since I finished the two laps in 9:30-ish,  but I vowed right there that I was going to come back the following year, more prepared.

Thus, I taped my bib above my door so I would see it every day, as a reminder. And I signed up for the race again on the day registration opened. 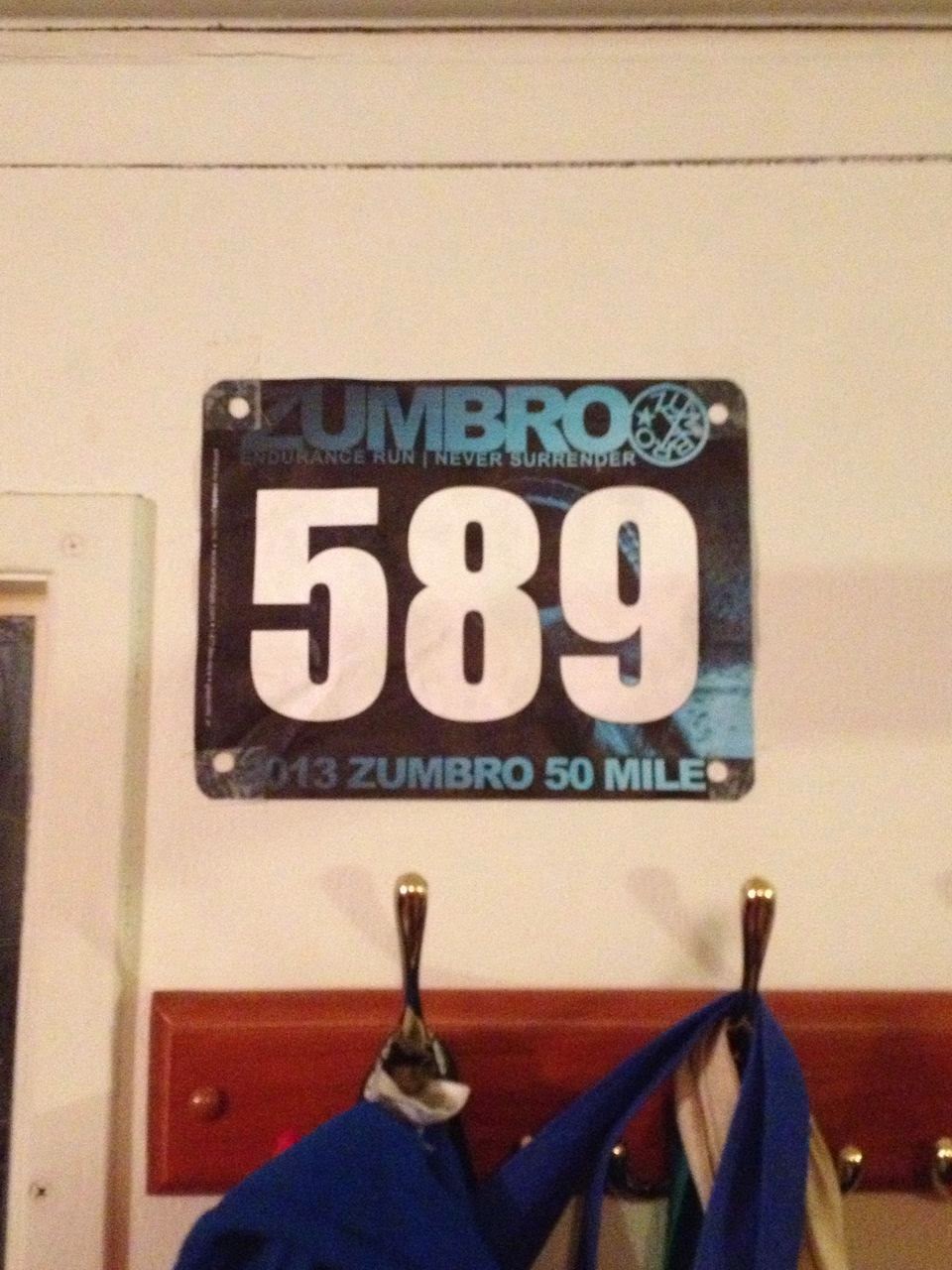 So, forward to April 12, 2014. I was better prepared and determined to finish no matter what the conditions or how much I had to walk. And fortunately it went much better. However, it was not without more drama! Here is a quick description of the day:

Many hills were extremely steep. Many roots. Endless rocks up to two feet across - embedded, or loose and slippery. (I didn't really know there would be so many rocks, since the snow and ice was so deep last year and covered them up.) Temps ideal (40's). No wind.

Loop 2: About 1/3 the way in, rain began (about 5am), first light, then medium, then a heavy rain with lightning, thunder, and even hail. Ran for about 45 minutes in this thunderstorm through newly-formed rivers of mud and then the rain stopped just as I was finishing lap 2, at about 8:45am. Completely soaked, completely frozen, and shaking uncontrollably. Luckily I had a dry shirt to put on and a rain jacket and I got some soup. Finished lap about 8:45, but it took me 20 minutes to get out of there due to the shaking.

Loop 3: It didn't take long for me to warm up once I started running. (Although for a moment I thought my legs had seized up.) Light rain picked up for another 45 min or so and then stopped and temps moderated, but course was a muddy monster. There were rivers of mud and muddy lakes. Many downhills were nearly impossible to navigate. Most of the course involved slipping and sliding with each step. Fun playing in the mud!

Below are some pictures. Before looking, note that some were used (with permission) from Zach Pierce Photography.

Some great pics here, although none of these photos capture what some of the uphills, and especially downhills, turned into after the rain, but envision a single track trail, full of rocks and 4-6 inches of slippery sloshing mud, twisting and winding nearly straight down, often with a cliff on one side. Completely treacherous! The only way down was to sit or to grab branches to keep you upright, or to skitter off the trail completely into the woods.

Nice job Tim...I ran the Hawkeye in march and then attempted the 50 miler here. Unfortunately, I did not finish and dropped out after 2 laps with some pretty vicious knee pain. I am going to attempt another 50 in October up in Savage, MN. I agree, the course was brutal and unfortunately I wasn't quite prepared for that. Way to go on the finish, I have mad respect for anyone who can make through that course and still be standing afterwards with a smile.

Good job Tim. It was good to see you there and I still remember your shaking uncontrollably. Good advice you gave me to, if you see water just run through it. I didn't always, but I did often. Course was brutal! I wrote a write-up too at www.trailrunningfaith.blogspot.com

Please check above results for accuracy!

Race Information for the 2014 race.
The Course (map)
More Course Maps
Map to the Start (for driving directions)
Another map to the start, from the hotel.
Race Hotel. Mention the Hawkeye 50K and you get 20% off!
Packet Pickup is at We Run from 4pm-7pm Friday night.

Super quick and very rough description of course: About 5 miles of road. About 5 miles crushed gravel. About 5 miles trails. Water crossing at mile 11.2. Aid stations at start/finish, and at miles 4.5, 9.6, and 12.9.

Race Course Video! It's sloppy and nearly 18 minutes long. I'm sorry about that. If I can improve on this I will, but at least it's something.